Capturing the discussion here so we can better respond and talk: 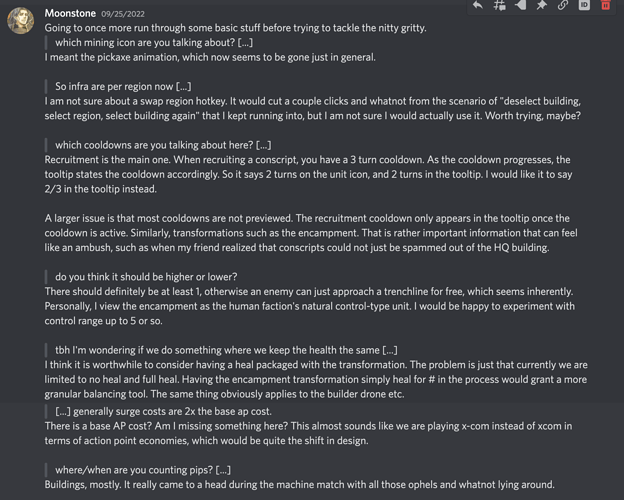 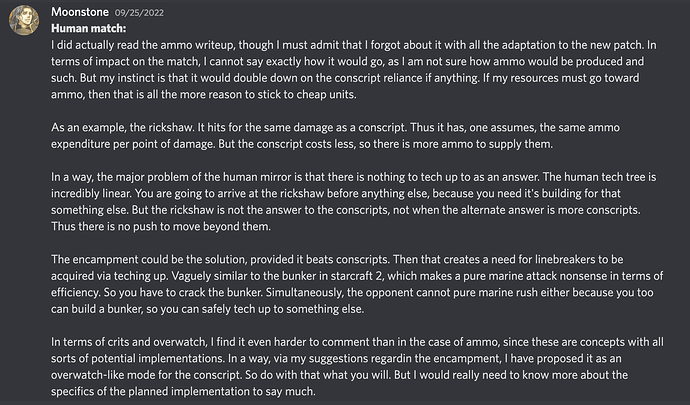 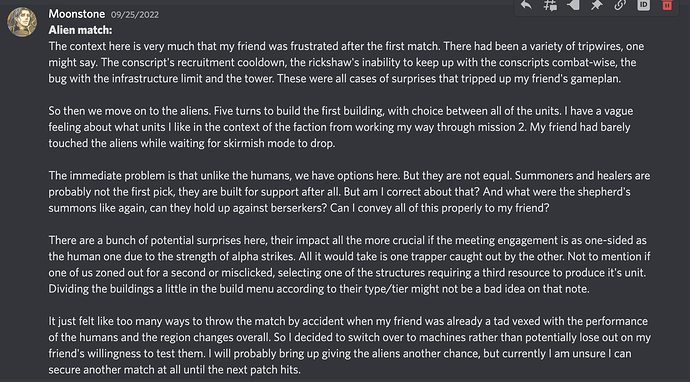 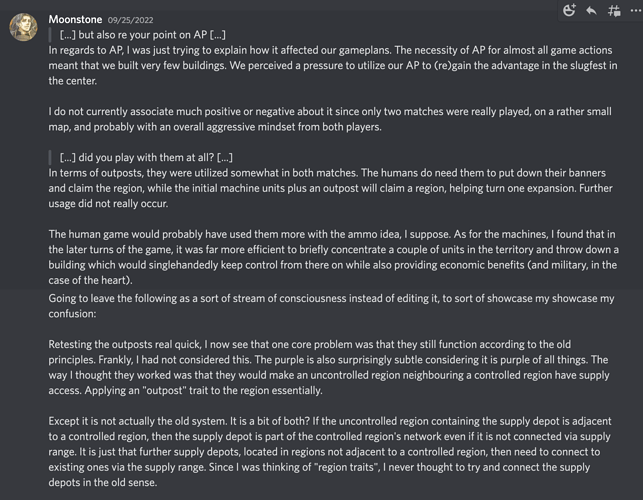 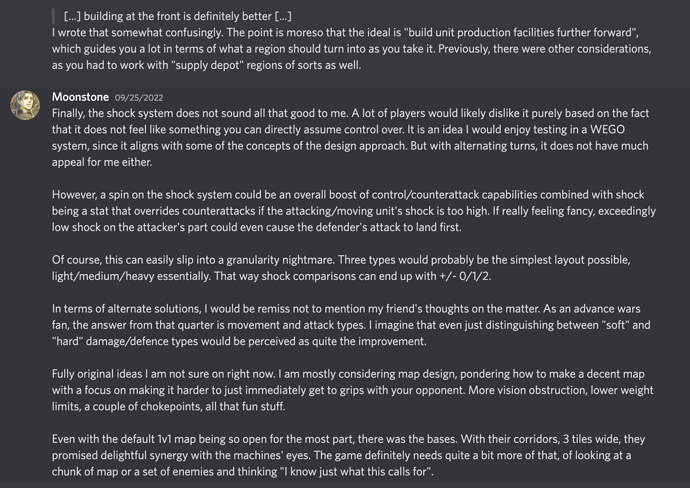 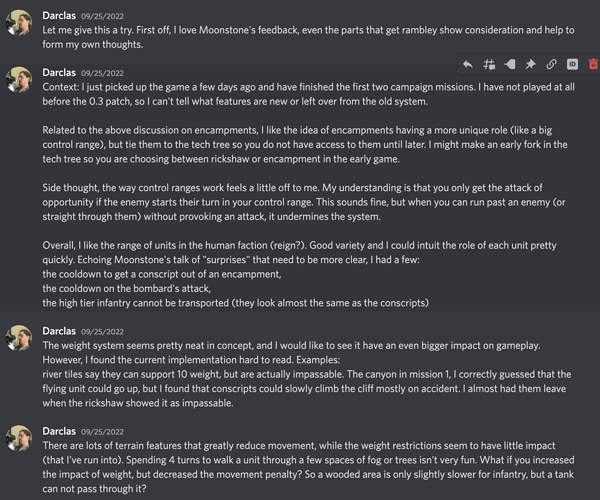 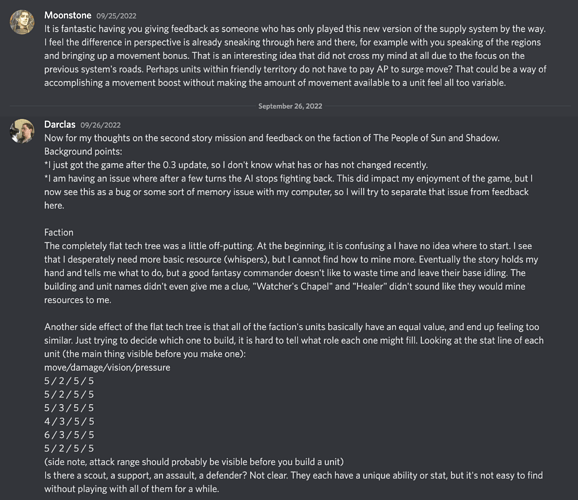 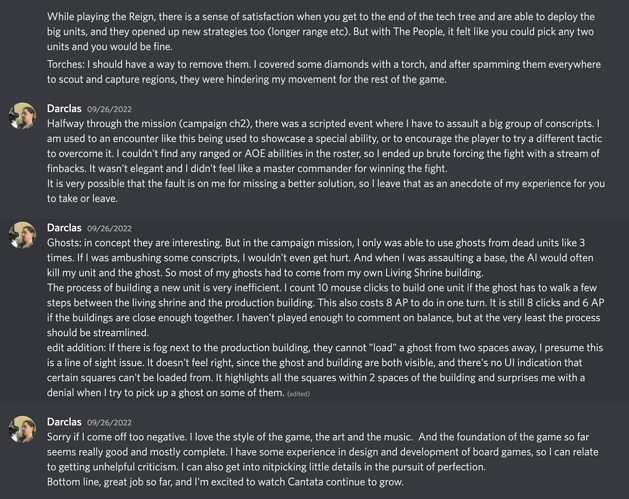 Also seeing this on our end, looking into it.

new patch that should be coming out Soon has a fix where you can now select a region while a unit is selected, provided you click outside the range of whatever ability it has activated (or move range, etc.)

we did some more UX in the new patch around this as well. interested to hear what you think.

will bring this up a lot as well but hoping new Ammo system patch will resolve some of this.

I misspoke here! You actuall CAN declare a movement AP cost in mods if you want, separate from surge, but we axed that for all core game units. First moves are free for everyone, and we only charge AP for surge.

Do you think numbers are better here? One thing to do would be to have pips + a number that says how many pips.

Interesting you brought up overwath style stuff because @Darclas brought up a similar possibility for such a system here:

You nailed all the basics! I think we in general need some sort of “unit info” panel to better see this instead of stuff it in a tooltip. This is an open question for us imo. You’re right that it only happens if moving is initiated from inside a control range, but we don’t do anything about moving “through” the range. What do you think? I like this idea but tbh it’s just a giant snafu of too much information, AND it makes ranged units really OP. One thing I have considered is something like …

I think it’s definitely in the cards and makes line-breaking / attacks be more dynamic than just pure points attack. There’s some other stuff we’ve got in the work around passives that I think will also make this more dynamic, but we’ll see.

One thing about Cantata is that it’s Cantata, so there is going to be a learning curve to any units we put in because they aren’t going to look like genric cavalry or infantry or whatever. We could dump all the info into a tooltip (and we kind of do now) but I think that’s a bad solve. What I want to do is basically add in a sort of “compendium” into the game, accessible in matches and likely outside of them, that just says what stuff does.

I agree the cogniive burden is high for the other two factions, so trying to figure out ways to better grant that information is a definite priority. Let me know if you have any other thoughts here.

Glad to hear you used them, I was worried they were avoided. They are definitely much more important in new patches with ammo, and their utility right now is most for capture stuff. We plan to give them a few more goodies as well and hope they can act of loci of control in matches.

And per your confusion — the way to think of them is that they extend the range of adjacent supply networks, and can also connect to themselves. They don’t influence region capture. So if you’re in an (connected) outpost’s range, you get access to resources from that connected network that you wouldn’t otherwise get. The “connections” aren’t manual but are automatic. TBH I am wondering if we should show like “additional inventory” in a unit’s UI to show what resources it is getting from a network/outpost it is inside of.

I think I’m with you that it could quickly become a granularity nightmare and is why I have avoided it. Things that sound cool for squad level games, when extrapolated to Cantata scale, can definitely feel tedious and micro-heavy. We do have something we are looking into (not overwatch) that I think will have some “shock like” characteristics, but we can talk more in the future about it when it’s in.

Looking forward to seeing your maps! Didn’t realize you were designing some.

Some @Darclas stuff that wasn’t talked about in your other thread.

Sort of similar to above, hoping to help this with some unit information codex thing.

We really go back and forth on this. The system in general we still really like, but also its hard to design directly for it because it can be frustrating to deal with often. We’ve taken a more lax aproach and use it more as a way to add texture to the map. For the River tiles (and water), the issue is that the weight system falls over for “water” — there is no way to express that concept with “weights”, so we fallback on an (invisible) tag system for special tiles.

The weight system doesn’t actually have a linked impact on terrains, it’s fully seperate from movement costs. The system you prpose where infantry move slow for it and tanks can’t pass is exactly what the weight system does do — tanks are too big to fit on tree tiles or mountain tiles, but smaller units can move through them.

Moonstone is right though that the weights definitely need some tunings.

This sort of conscript evolution does sound fun…

We are actively working on a few things to spice up regions. We want them to feel different for sure, and have some interesting stuff planned to that end. One is that buildings/units can grant passive benefits to regions they occupy. Population will also now comes from infrastructure (instead of being an abstract part of regions). The idea is that you start to mentally be like “this is my unit producing region because I’ve got stacked bonuses here”, etc.

I definitely like something in this realm. Not sure what it would be but I agree something here would feel “right”.

Thanks for the feedback @Darclas and Moonstone. Excited for you both to keep playing.

Thank you for taking the time. I read through the other threads you responded to too. Looking forward to the next patch. I don’t think I have very much to add until I get my hands on it and see what direction things are moving. (the first update since I started playing, how exciting!)

A comprehensive unit codex that you can pull up in-game would be great and would help with several friction points I ran into.

got to run, maybe post a little more later.

On the subject of Outposts, in the first story mission I had a weird situation. I created an outpost chain through an enemy controlled region to connect my main territory to a single region that I had also captured. I don’t remember exactly how it worked, but it wasn’t how I expected. Maybe my units had access to resources from either supply chain, but it didn’t exactly link the resources that the single region was producing back to my main network?
You’ve probably changed enough that it’s not important what it did then. What I’m trying to say is to make sure you consider how those strange cases should work. I’m sure you have, but it can be difficult for a player to predict how the resource network will react to every edge case. I will try to recreate it in the next patch and see what happens.

Hmm, not sure what state you were in obviously but here’s what I would expect (based on what I coded):

Meaning if Region A was connected to Region B via Outposts, Region B wouldn’t get Region A resources, but the outpost chain between them would.

I can definitely see how it would maybe seem like A being “connected” to B via outposts would mean you think they share resources, but we don’t do this (at least right now). Maybe we should? Said differently - “Regions only connect via adjacency, not via outposts”. Making outposts be “connective” is possible but I’d have to really consider the ramifications.