Hopefully this will help all of the new Modders in the making, it is a HoldTheLine attack waves type map which every 4 to 5 turns releases new attack enemy (Reign) attack waves, it has got some simple dialog and other bits that you guys can review to improve your own maps

The basic functionality of the map is the implementation of a Clock, which is a way to time the spawning of enemy units and it is done through 2 sets of triggers, one which starts at the begining of the game which sets a unit to patrol, and wherever this unit enters specified locations at each side, then we can spawn enemy units and tell them to attack.

Ought be noted that because of some not as of yet set up trigger functionality, this right now needs to be done through a special player which only controls its single clock unit, so if you guys would want to replicate it, be sure to do so that way, as otherwise it would still work, for example if the units are set to the Shoal player, but wherever the unit enters the specific locations, then it might do multiple spawning of the enemy units! So be sure to keep that in mind.

Other thing to note, is that at least on this map, if you choose to play it, you can destroy the Radio towers on it to disable different attack spawn waves, so even when it can be daunting at first the spawn triggers and the way the clock works can be super modular by itself 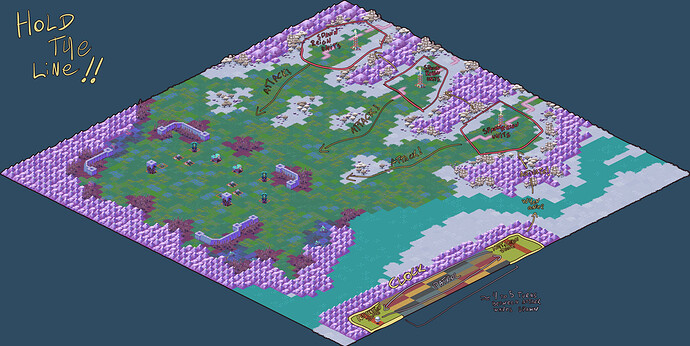 Hopefully it comes of use to you all, and if you have got different ideas or requests for other potential guide maps, go for it, let us know

@Kantu Anything specifically you want to call out here for triggers people should look at, or stuff you want to explain to better give a sense of how stuff works? I feel like people would really enjoy a sort of plainly written description of how everything works together because you’re doing some really interesting things here!

Tomorrow I’ll draft a longer explainer, as today I was away most of the day